Fear: The Greatest Obstacle to Happiness 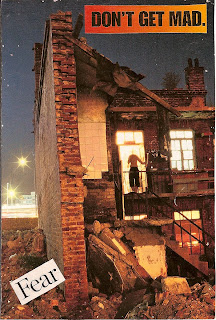 For most of us, fear is a constant presence. It attaches itself to us like a tick and sucks the life from our bodies and souls. We’re taught to fear from the moment we enter this world, and from then on, as my blog-partner Lyndsey Powers wrote in an earlier post, “it’s fear-speak everywhere you turn.”

We fear failure. We fear poverty. We fear exposure. We fear losing the people we care about. We fear sickness and death. Some of us spend so much time and energy trying to protect ourselves from our fears that we can’t experience joy. Often, however, the things we fear lie far off in the future or may never happen.

My favorite poet, the 14th-century Persian Sufi master Hafiz, put it this way: “Fear is the cheapest room in the house. I would like to see you living in better conditions.”

Fear is the voice of the ego. The ego’s goal is control, and it achieves its objective by keeping us in a perpetual state of near-panic. The ego (backed up by 24/7 bad-news media) tells us the world is a frightful place, filled with suffering and evil, and there’s nothing we can do about it. But what if that’s not true? What if the ego is lying to save its own skin?

Lately, I’ve been experiencing a lot of fear. I know I’m not alone. A shaky economy, war, natural disasters, and a host of other perils have sent lots of ordinarily strong, stable, sensible people into a tailspin.

So a few nights ago, I appreciated the encouragement and affirmation a dream offered me. In it, I was driving along a winding road after a major windstorm. Branches and debris were strewn all over the road. I dodged most of them, but finally came upon a large, fallen tree that blocked my path. I tried to go around it and over it, to no avail. The only answer was to get out of the car and attempt to drag the tree out of the way. Now, I’m a small woman and this was a BIG tree, and I had no hope of budging it. But as I took hold and started to pull, surprisingly it came away pretty easily. The obstacle wasn’t as great as it appeared. Hmmmm.

I like to think Brendan Francis was right when he said, "Many of our fears are tissue-paper-thin, and a single courageous step would carry us clear through them.”

How do your fears show up in your dreams? Do closet monsters disturb your sleep? How do you deal with them?

Posted by Skye Alexander at 9:50 AM

I've noticed in the last year that my dream antagonists have shifted from slobbering beasts and creepy menfolk to strong, magickally gifted women. Although these dreams are less nighmarish than my previous themes there is definitely more frustration and miscommunication overlap, between the dream and my daily life. It's been interesting to participate in this process. I am assuming that it's a consciousness shift from perceiving the Enemy as "out there" to knowing that I am the one who gets in my own way, and therefore I fear myself most of all.

It's so good to hear from you again! I've tried to access your website, but it seems to have been taken down.

I certainly agree, the Enemy lies within. Interesting how your dream antagonists have changed. I'd like to hear more about why you see strong, magickally gifted women as antagonists instead of helpers. (Although maybe that distinction is irrelevant.) Is it your own power that you fear?

Thanks for sharing your insights!

For me, fear is a tool, an alarm like a siren. But then, I view all emotions as a form of communication... information to be used to make better decisions. The fear, I believe, that most people get caught up in, is the fear of making the choice based on that information, as it often deviates from what is considered normal and good for our public self image.

I haven't experienced fear in a dream in a long, long time. When I was a small boy, I had a series of dreams where I was being shot to death. the dreams stopped when I finally allowed myself to die without fighting it. In my life at that time, I was learning how to not let my older brother's bullying get to me.

Have a nice day.
Craig

Thanks for the insights, Craig. I like your idea of fear being a tool, rather than an obstacle--use it rather than letting it hobble you.

Thank you so much for your kind wishes. Happy holidays to all, and may peace reign on earth. Blessings to everyone as the year draws to a close and a new cycle dawns.

The 3:15 Club is a place to communicate with one another in the wee hours of the morning when sleep eludes us. We’ve discovered that in the still of the night, our creativity is often at its peak. With the distractions and demands of the daytime world temporarily silenced, the inner world can make itself known. This online “after hours club” provides a forum to share your thoughts, imaginings, dreams, and insights with a circle of friends, instead of simply lying awake alone in the dark.